Horses and sheep graze on coastal grassland which makes up about half of Northam Burrows Country Park. 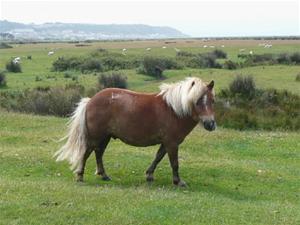 The Burrows were once used to raise rabbits because the land was not suitable for growing crops. Nowadays the land is grazed by sheep and horses.

15 miles of drainage ditches criss-cross the Burrows to drain the grassland which improves it for grazing and golf.

Silverweed spreads across the common giving a glistening appearance to the area. Sharp Rush (so sharp that it is capable of spearing a golf ball) grow in the wetter areas along with rare Water Germander. Corn Mint with its fragrant smell and clusters of pink flowers line the ditches adjacent to the roads. Doves Foot Cranesbill (named because of its leaves which resemble the birds foot) grows alongside the yellow Lady's Bedstraw (so called because it was used to fill mattresses in Victorian times due to its sweet aroma). Delicate Common Dog Violets can be found hiding their purple heads amongst the grass whilst carpets of Thyme flow over the common.

Wheatear flit here and there perching on outcrops to survey the area. The Twittering song of the Linnet rings out mixed with the call of the Pied Wagtail. The black and chestnut Stonechat can be spotted perched on the bramble tops whilst flocks of Starlings forage for insects in the short grass below. Wading birds such as Curlew and Little Egret rest upon the common whilst waiting for the tide to recede so they can resume feeding on the mudflats. Glimpses of blue and orange can be seen as the Common Blue and Gatekeeper butterflies flit by. Rabbits scurry between the vegetation looking for fresh shoots to nibble on disturbing the Blue-tailed Damselflies as they go.

Even with large numbers of visitors and golfers, the wildlife is still abundant. Careful observation and patience is all that's needed to experience it.