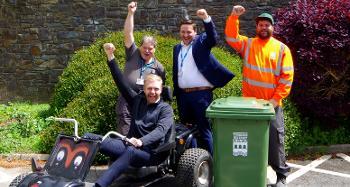 Torridge Racing, the Councils newly formed racing division, has officially announced their entry into this year's Bideford Soapbox Derby, which is due to take place on Sunday 19th June.

Last year's race was attended by an estimated crowd of around 5,000, watching more than 30 teams' race against the clock! The route saw competitors finish on Bideford's historic quay, after navigating their way through two large ramps and more hay bales than Bideford has seen since its market days. Amongst all the cheering and celebrating, the community rallied together to raise an astonishing £10,000 for the local charity ChemoHero.

ChemoHero creates and provides 'Boxes of Kindness' to everyone undergoing chemotherapy treatment at North Devon District Hospital. Over 35 items are included in the boxes for patients to use both during treatment and afterwards while they recover at home. Many of the items are designed to help with the side effects of chemo and are provided at the start of treatments when patients are often unfamiliar with the process or what they might need.

The Torridge Racing soapbox lovingly know as 'Peggy' has been expertly "bodged" together with 100% recycled materials. The chassis compromises a defunct mobility scooter and two quad bikes, welded together by Chief Mechanic, Adrian Blight. Key Pitts Off Road Adventures also deserve a massive thank you for donating the front end of a quad bike to finish off the design. The team hasn't quite decided on the bodywork just yet, but Mechanic Kieron Carey-Body is keen for a Torridge waste bin or two to feature! Driver Mark Crocker is hoping for some pre-season testing while team manager Tom Vanstone is waiting for the promotional team material so the fund raising for the ChemoHero charity can kick off in earnest.

The Organising team behind the Bideford Soap Derby event said:

"After a colossal debut to the Torridge events calendar last September, we have been working hard to make an anticipated comeback. This year sees a "boneshaker" ramp added to the map, a large LCD screen with film crew to capture the action and a more precise laser timing system to help decide who will be crowned champion. Bideford Soapbox Derby 2022 is on course to be packed with fun, laughter and carnage. The locally organised event is free to attend with stalls including a raffle, delicious refreshments, and a stage with live music. The team at Bideford Soapbox Derby is looking forward to welcoming all the soapbox competitors and viewers alike. It's going to be a blast you wouldn't want to miss it!"

All funds raised by the teams will go towards supporting the charity and their work. To support the team of your choice visit the Bideford Soapbox Team's Facebook page at: www.facebook.com/Bidefordsoapboxderby