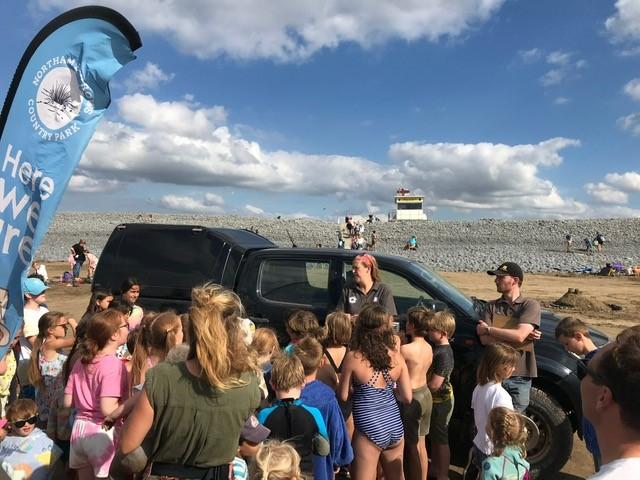 On a late summer Tuesday afternoon, a large group of expert sandcastle builders assembled on Westward Ho! beach for the annual Northam Burrows Sandcastle Competition. Armed with buckets of ambition and shiny spades, the teams took to the sand to build their creations.

The builders had a limited amount of time to complete their sandcastles, that eventually ranged from sea creatures to architectural masterpieces. Most teams started in the traditional way of packing sand and water into large mounds before expertly carving and finalising their designs. The grand prize was once again the prestigious Gold Castle Award, which every team was keen to take home and proudly display on their mantelpiece.

The judges had a tricky time picking the top three builds due to the many spectacular creations but eventually agreed on a winning design. 'A quiet Tuesday Sea Kayak' took the win with a large, expertly sculpted kayak, big enough to fit a member of the winning team. 'Shelly the turtle', complete with a nest of eggs scooped second, with third place going to a realistic portrait of the Sith Lord, Darth Vader, on holiday.

An extensive collection of photos from the event can now be viewed on either the Council's Facebook page at www.facebook.com/torridgedc or the Northam Burrows page at www.facebook.com/northamburrows. And if you feel inspired by the array of fantastic designs, then why not visit your local beach and get some cheeky practice in before next year's competition?

The Northam Burrows Rangers always deliver a first-class series of events throughout the summer, so it's no surprise that the sandcastle building competition was a roaring success! The Blue Flag beach at Westward Ho! is a massive asset for Torridge and it was wonderful to see so many families enjoying themselves at the event. The imagination and skill on display was outstanding, making judging an impossible task. Still, thanks to our judges, we were able to crown this year's winner. A massive well done to everyone involved, and if you ever wondered where Darth Vader goes on holiday, well, now you know!