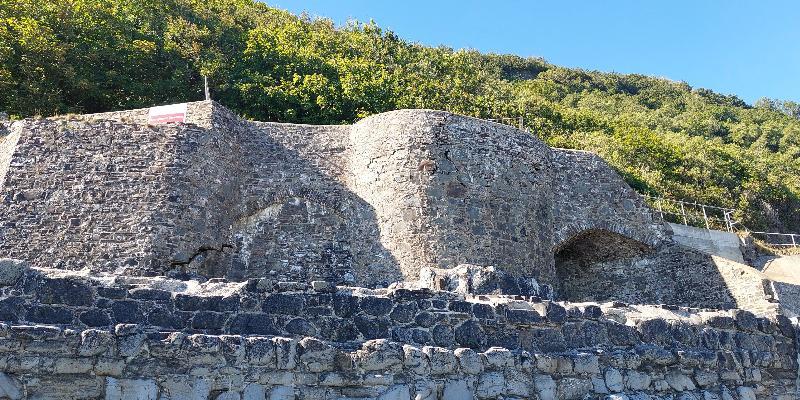 Torridge District Council have announced plans to appoint contractors to carry out a partial demolition and removal of the top section of the Lime Kiln at Bucks Mills to re-establish better stability for the structure and protect the public from the danger of potential sudden collapse.

Following a recent routine inspection of the Kiln, cracks and movement were noted in sections of the stonework. The Council subsequently installed temporary signage to advise members of the public venturing seaward of the kiln of the potential instability and possibility of further sudden movement and land slips. A Geotechnical Engineer was engaged to inspect the site in order to review the cause and significance of the movement and determine an appropriate course of action. The recent findings from the survey have now recommended the removal of a section of the upper Kiln, which remains the main area of concern.

Since the Kiln is listed and of historic significance the Councils Building Control and Conservation Officers were also consulted but have in turn designated the structure as "unsafe" and confirmed that the proposed approach to partial demolition as the most appropriate course of action. Devon County Councils Historic Environment Team and Historic England were also involved in drawing up plans and an Archaeological Survey will be undertaken to ensure the features of the structure are recorded prior to and during the removal of any material.

The Council is currently progressing works with specialist demolition contractors and tenders for the work are being sought. It's anticipated that the appointment of a contractor will take some weeks with commencement of work on site expected sometime in October.

Given the recent dry weather conditions and the likelihood of a wet winter a decision has been taken to erect a field gate and further relevant warning signage to members of the public of the risk of landslides in the area, but allowing access for the public at their own risk. The gate is located on the footpath just downhill of the National Trust owned Cabin and the risk is being highlighted by engineers as hot weather followed by very wet conditions were the precursor to previous slippages and damage at the Kiln in 1990. The precautionary access controls and warning signage have been drawn up with that precedent in mind.

"The measures put in place have not restricted access around the Kiln completely but are there to warn the public of the current risks around the site. We would suggest that it may be advisable to avoid the area for the time being and we hope to have the necessary work completed in as short a time as possible. We will in the meantime be monitoring the site for any further movement until this work has been completed and ask the public to be extra vigilant and cautious if visiting the area."