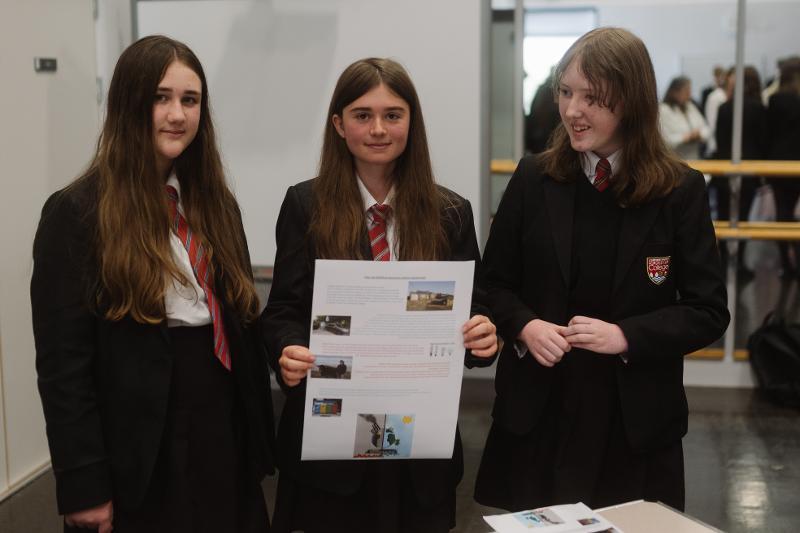 Bideford College played host to a prize giving ceremony last week that marked the culmination of a competition that asked pupils to develop positive Net-Zero Visions for Bideford and ways to tackle climate change in their neighbourhoods. Around 260 pupils, teachers, sponsors and organisers gathered for the event with 15 projects making it through to the final judging session from the 50 developed by Year 9 of the college as part of their enrichment week syllabus.

The children were asked to consider the range of issues impacting on climate change before presenting their own summaries of the problems, their suggested solutions and how these would be communicated to communities through posters and other media.

The ideas they generated included a wider distribution of electric vehicle charging points around Bideford, solar panels on roofs, and keeping food production and supply local. They also suggested regenerative farming that was more in tune with nature and in harmony with habitats, thereby encouraging greater biodiversity, and electric buses to replace the diesel ones on school routes.

The winning team members shown above LtoR were Lola Barnes, Aisha Hudson, and Francesca Smith who each received a first prize of £15 in vouchers with the runners-up shown below were LtoR Daniel Cawsey, Sasha Bengey, Keeley Burslem and Peer Biggs awarded £5 each, donated by the Net-Zero Visions project.

The Net-Zero Visions for the Devon Climate Emergency project, led by the University of Plymouth with support from the Devon Climate Emergency Response Group and Devon's Net-Zero Task Force, aims to bring together communities with creative professionals and net-zero transition experts to produce positive visions - visual and arts-based communications of how to reach Net-Zero in different locations. Part of a Devon-wide project the aim is to raise public awareness of the Devon Carbon Plan while engaging people in the process and possibilities of change. The output will be incorporated into a book for communities across the county who want to become net-zero.

Dr Emma Whittaker, Industrial Research Fellow at  the University of Plymouth, is a co-investigator on the Net-Zero Visions project, which is funded by the Arts & Humanities Research Council. She said:

"We were impressed with how the Year 9 students at Bideford College had understood and clearly articulated how net-zero can be achieved in Bideford. This is a testament to the hard work of teacher Dan Munro and colleagues, who facilitated an educational and fun learning experience during the school's enrichment week. This was organised in collaboration with North Devon and Torridge Councils' Sustainability and Climate Officers, Donna Sibley and Victoria Hancock. We are looking forward to seeing how the students take the project to the next level by producing artworks that communicate these issues, and they will be displayed on the Devon Climate Emergency website."

Torridge Council was asked to be part of the judging panel having declared its own climate emergency in 2019, which has resulted in working with people both inside and outside the Council on projects to reduce the causes of climate change, and adapt to the impacts.

"The children's entries were all outstanding as they had well thought out and researched ideas, presented clearly with creative posters. The winning groups explored a range of different themes coming up with clever and innovative solutions for each, and all members of the winning groups shared the presentation showing teamwork, which was clearly well rehearsed as they did an excellent job!"

For more information on the Net-Zero Visions project visit https://www.plymouth.ac.uk/news/creating-net-zero-visions-of-our-future-communities