The seashore is a boundary between the land and the sea and due to this transition creates a very diverse habitat. 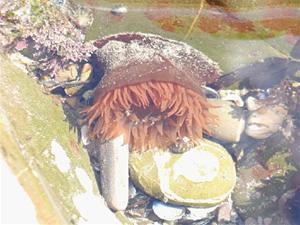 There are two high and two low tides in approximately 24 hours around the British coast. The times and levels vary due to the gravitational pull of the moon.

Life on a rocky shore is harsh due to many factors including high and low tides, temperature changes, salinity levels and the vagaries of the weather. The flora and fauna which live there have adapted to these changes in various ways to enable them to survive.

Rocky shores are abundant in wildlife due to the variety of habitats it encompasses. Within a rocky shore there are rock pools, damp crevices, bare rock and sand all which offer homes to many species. Rocky shores can also be divided into zones depending on the tidal level (upper, mid and lower shore). In each of these zones different species can be found.

Seaweeds are classified according to their colour which are green, brown or red. The colour depends on the pigments which they contain. In general green seaweeds are usually found on the upper shore, brown on the mid shore and red seaweeds are found on the lower shore and in deeper waters off the coast.

Fauna also varies within the rocky shore. Blennies can be found swimming in the pools along with the inquisitive Prawns which will happily investigate your fingers if you wiggle them about in the water. Limpets and Barnacles are clamped firmly onto the exposed rocks, Shore Crabs and Edible Crabs can be discovered by gently lifting rocks and seaweed and the Anemones resembling red blobs of jelly at low tide can be seen waving their tentacles about when the sea comes back in. Sea Hares graze the seaweeds ejecting a purple slime as a defence if disturbed, if your lucky you may even spot a Starfish.

So if you once thought a rocky shore was uninspiring and uninhabited take a closer look and delve into this secret world. The colours alone are worth experiencing, the blues of the Mussel shells, brown seaweeds, red Anemones, purple and silver Topshells, yellow Periwinkles and orange Edible Crabs.

For an afternoon of exploring all you need is a small net, bucket and suitable footwear.