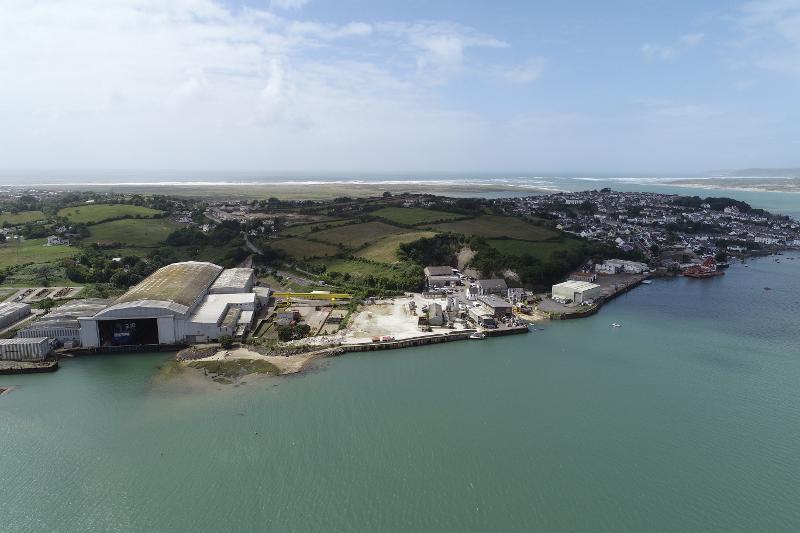 Torridge, universities and other partners have joined forces for a funding bid to position Appledore at the heart of global Net Zero maritime ambitions

Torridge Councillors have given their enthusiastic backing and support to a pioneering funding bid, seeking approximately £15m to create the Appledore Clean Maritime Innovation Centre (site behind floating crane barge in picture), a project which will place northern Devon at the core of maritime developments in the Net Zero age, and see the first ever university research centre in northern Devon.

Its hoped that the centre, at Middle Dock, a site which neighbours the Harland & Wolff shipyard, will establish northern Devon as a global-leading research and development space for collaborative next generation maritime initiatives. It will feature cutting-edge research and industry partnerships from the University of Plymouth and the Centre for Future Clean Mobility (University of Exeter), as well as offering a range of offices, workshops, a wet lab and aquaculture tanks to provide modern facilities for local and national businesses to innovate and grow.

The bid to the Levelling Up Fund will be the largest ever submitted by the district council and is designed to act as a catalyst for local economic growth, by providing an anchor for Floating Offshore Wind activity in northern Devon. With a proposed 4GW of electricity to be generated by the Celtic Sea Floating Offshore Wind (FLOW) developments, which is equivalent to enough energy to power approximately 3 million homes, FLOW is expected to provide around 3,000 jobs and £682 million in supply chain demand for both the South West and Wales (see report  Heart of the South West LEP (HotSW) FLOW opportunity Report (PDF) [1MB] ).

The maritime sector has played such an important part of the region's history and this project is seen as a real opportunity to move Appledore into a global maritime future, inspiring young people in the process and creating genuine economic benefits across the community.

We hope to work with schools and education providers to build excitement around opening up new opportunities and inspire learners. Petroc are key partners in the project and are already developing a range of future maritime-focused courses to ensure the best possible skills pipeline for future sector needs.

The proposals are also fully endorsed by the North Devon UNESCO Biosphere. The Biosphere's cutting-edge Smart Biosphere work is taking a global lead in the rapidly growing field of environmental intelligence.

Torridge officers are now working with representatives from the academic institutions, local industry, and other partners to refine the bid that will need to be submitted by 6th July. An announcement of winning bids is expected later this Autumn.

Sound good? Have your say on the bid and help the next generation for Torridge or register for further updates - go to www.torridge.gov.uk/maritimeinnovationcentre

"Firstly I would like to say how genuinely excited I am that our Council is developing and submitting to the government such a leading and innovative project, which will serve Torridge and our wider community for years to come.

"We aim to stay ahead of the game as the sector is already moving and developing very quickly. It's great to be collaborating with our partners at Heart of the South West LEP (HotSW), academic institutions, the maritime sector including Maritime UK (SW), local businesses and other public sector bodies in an integrated approach that has such huge potential. This is clearly one of the most important decisions for jobs and growth this Council has taken in recent years and we hope that our bid will be the catalyst that unlocks the investment to bring these plans to fruition."