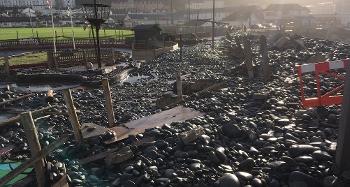 Recent storm activity, coinciding with high tides and strong winds have resulted in several points of overtopping of the pebble ridge at Westward Ho! in recent weeks causing flooding and some disruption to local businesses and properties. Flooding was also evident across the Northam Burrows with the Sandymere Lake area flooded up to the access road for the third time this year. In the aftermath of the last storm the Council and partner agencies have been involved in the task of assessing and fixing breaches, which has so far included beach recycling of over 600 tonnes of pebbles to provide reinforcement to the most badly affected elements of the ridge.

The project teams had already been working on longer term linear defence works for this area of coastline, the bulk of which were originally scheduled to be implemented early next year. The planning has included collaboration with the Environment Agency and Natural England and a careful consideration of the need to protect the special character of the dunes and burrows, which forms part of North Devon's important UNESCO Biosphere Reserve. However, the recent events and flooding has prompted the planned work programme to be accelerated and brought forward as a matter of urgency, and ahead of any further potential winter storms. The partners and contractors have now agreed a schedule of works that will commence from next week - 30th November 2020.

Contractors Atkins and Kier have been appointed with the heavy plant operations subcontracted to local firms including ground works to SEL Clarke of Bideford, bringing a welcome financial boost to the local economy and jobs. Over 2,560 tonnes of rock armour have been procured that will now be delivered by road over a three-week period from the beginning of December. The initial plan to have these delivered by sea-going barges has been ruled out as the weather required for safe operations could not be guaranteed. The energy dissipating boulders; each weighing approximately 8 tonnes, will be placed in front of concrete Legato blocks and will form the backbone of the first phase of Linear Sea Defence works. The rocks will be brought in on flat-bed lorries each carrying 3-4 rocks totalling around 24 tonnes per load. As a result, there will be a requirement for over 100 lorry movements over the anticipated three-week period when the bulk of these materials will be delivered. The works to position and place these will continue to around 20th January with a short break in the works scheduled over the Christmas period.

Engineers have acknowledged that the scale of the coast protection works will mean there will be some unavoidable disruption to local businesses and residents while this necessary work is undertaken. During the three-week period access to the Burrows from Pebbleridge Road will be closed as lorries will be entering the staging area for materials via this route. They will exit the site along Sandymere Road. Work will be scheduled to minimise disruption as far as possible and the Council are also asking for the publics co-operation to adhere to new signage advising of road closures and other restrictions so that the work can be completed quickly and without interruption. The works will be funded by Torridge District Council in the interim but will ultimately be paid for by the Environment Agency as part of the wider linear defence scheme for the region.

"It is extremely welcome news that work is due to start to strengthen the coastal defences at Westward Ho! before Christmas, with contractors appointed and rock armour scheduled to arrive.

"I have convened and chaired several meetings in the last year with the statutory agencies, the Council and local business owners to discuss the urgent need to bring forward the planned ameliorative works to the coastal defences at Westward Ho! to protect homes and businesses. In between those meetings, we have kept up a constant dialogue, and I am grateful for the combined efforts of the participants, and the laudable commitment of Torridge District Council to achieve a solution before the end of the year, which have ensured these vital works are taking place now pending the execution of a long term strategic solution for Westward Ho!."

"The teams involved in this project have been working flat out not only to make safe the existing structure damaged by the recent storms but also to bring forward the longer-term programme for defences. We regret that some residents and businesses may be inconvenienced due to the scale of these works, but they are necessary to protect the area from further breaches or even a potential more catastrophic failure of the existing defences. We would like people to know that we had planned for a longer lead in time, including more time to consult with those most likely to be affected by the works. However, due to the urgency this hasn't been possible, but we will continue to adjust and modify our approach where the process allows to limit and moderate any disruption."

Details of the works, changes to access arrangements, site maps and ongoing updates will be available on the Councils Website shortly.